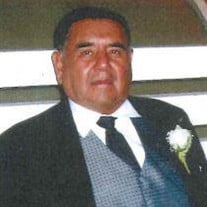 Carlos M. (Charlie) Romero, age 89, passed away peacefully on January 28, 2020 surrounded by his loving family. Driven by a strong will and alegria de la vida, he overcame several strokes over the last 15 years until ultimately, the Lord called him home. Charlie was born in Tucson, Arizona to Manuel and Josefa Romero, the fifth of seven children. He met Theresa (Terry) Sullivan in 1950. They fell in love but had to place their courtship on hold when, as a Marine Reservist, he was called to duty to serve in the Korean War. He served proudly and bravely fought in the Battle of the Chosin Reservoir. He returned to marry Terry in 1953 and with the birth of their son Charles (Chuck), began a family of one son and four daughters, Elaine, Diane, Rebecca and Sylvia. They moved to San Diego in 1955. He worked at Naval Air Station North Island in the aviation electrical engineering division for over 30 years. After retirement, he and Terry traveled extensively. Charlie enjoyed horseshoes, billiards, cards, dominoes, hunting, playing guitar and singing Mexican songs. He was always keeping busy and looking for the next repair project. His life philosophy was simple. Enjoy each day, work hard, love unconditionally and, above all, treasure family. His wife of 66 years was the center of his world. He was very close to each of his children and had a strong bond with his ten grandchildren, Kristopher, Jennifer, Janelle, Lauren, Brenda, Robert, Mychal, Clayten, Emily, Tyler and nine great-grandchildren Theresa, Isabella, Annalisa, Charles, Dylan, Payton, Harper, Kaden and Konner. Many gatherings with family and friends were made memorable with his singing, his humor and infectious laugh. He continued to laugh and smile as his time drew near and we will always carry that in our hearts. We are comforted knowing he was greeted in Heaven by his cherished son and beloved family and friends. Celebration of Life (immediately following burial) 4:00 pm - 6:30 pm Fast Times Bar & Grill 3065 Clairemont Drive San Diego, CA 92117 ***Family would also like to extend the option to you to donate to Parkview Hospice Home in Honor of Charlie. To make a donation with a credit card over the phone, the direct line is (619) 740-4200 To make a donation online – https://give.sharp.com/tribute-hospice To mail in a check, the address is: Sharp HospiceCare Fund PO Box 158 La Mesa, CA 91942

Carlos M. (Charlie) Romero, age 89, passed away peacefully on January 28, 2020 surrounded by his loving family. Driven by a strong will and alegria de la vida, he overcame several strokes over the last 15 years until ultimately, the Lord called... View Obituary & Service Information

The family of Charlie Maldonado Romero created this Life Tributes page to make it easy to share your memories.

Send flowers to the Romero family.