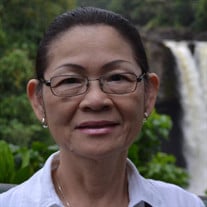 Ching Chin Casey, 78, peacefully passed away in her hometown of San Diego, California receiving her angel wings on December 30, 2021. Ching was born in Taiwan, ROC on November 21, 1943. This is where she grew up and received her education up through high school. She continued to reside there with her parents to help take care of her little sister until the winter of 1965. During this time Ching’s friends had arranged for her to go on a blind date, which set her on a new path; that day little did she know that she had just met her future husband, Richard. Ching and Richard were married in a civil service on October 12, 1968, in her homeland and then moved to Bridgewater, Massachusetts on May 1, 1969. From there the two ended up having another marriage ceremony in Massachusetts at St. Thomas Aquinas Church on December 28, 1969. Since moving to the United States Ching decided she wanted to become a U.S. Citizen, pursued that goal, and received her Certificate of Naturalization on September 6, 1972, in Norfolk, Virginia. After that it was on to Mississippi and ultimately San Diego, California in October of 1977, where Ching and Richard were happily married for 53 years. Ching held a few part time jobs, but her main focus and the most important one was being a homemaker, a loving wife, and caring mother/grandma/Gribby and friend. She enjoyed cooking & eating, shopping, traveling, staying up late to watch old westerns, going to the casino to play bingo & slot machines, creating traditions, spoiling the grandkids, and most of all spending time with family and friends. Ching is survived by her husband, Richard; her two daughters and their spouses, Patricia and Erick Engel, Pamela and Todd Wood; and her grandchildren Jake Engel, Paige Engel, and Kayla Wood. A Visitation will be held on Monday, January 24, 2022, from 4:00-8:00 pm at: - Clairemont Mortuary 4266 Mt. Abernathy Avenue San Diego, CA 92117 A Funeral Mass is scheduled for Tuesday, January 25, 2022, beginning at 11:30 at: - St. Catherine Laboure Catholic Church 4124 Mount Abraham Avenue San Diego, CA 92117 The Burial to follow at: - Miramar National Cemetery 5795 Nobel Drive San Diego, CA 92122 In lieu of flowers memorial donations on behalf of Ching can be made to: St. Catherine Laboure Catholic Church www.stcatherinelaboure.net Condolences may be left on Ching Chin Casey’s online guest book:

Ching Chin Casey, 78, peacefully passed away in her hometown of San Diego, California receiving her angel wings on December 30, 2021. Ching was born in Taiwan, ROC on November 21, 1943. This is where she grew up and received her education up... View Obituary & Service Information

The family of Ching Chin Casey created this Life Tributes page to make it easy to share your memories.

Ching Chin Casey, 78, peacefully passed away in her hometown...