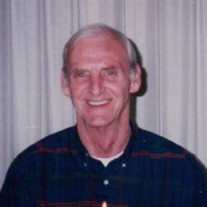 On Sunday, May 26, 2019, Darby (John) Leon Thompson, loving husband, brother, father, uncle, grandfather and great-grandfather passed away peacefully surrounded by his loved ones at the age of 79. Darby was born on November 21, 1939 to Henry Lee and Muriel Ester (Keeney) Thompson. While attending The Plains High School he played many sports including basketball, baseball and football. Upon graduation he joined the Army where he served in Korea as a firefighter. In 1962 he married Muriel Elaine Williams and together they raised a daughter and 3 sons. Darby was a hard working machinist in the Aerospace industry, first at Abex in Athens, Ohio and then Rohr after he moved his family to California in 1974. An avid sports fan, Darby was passionate about coaching Pony League baseball at Hickman Field in his community in Clairemont. He LOVED his cats, Patch and Pumpkin, football season and also enjoyed visiting the local casinos. He was known for his twinkling blue eyes, infectious smile, and his kind and gentle spirit. Darby was preceded in death by his father, Henry Lee, his mother, Muriel, his step-father James, his sister Nancy (Charlie) and his son Jack. He is survived by his wife Muriel, three children, Tammy (Mike), John and Robert, five grandchildren, Andrew, Brian (Jen), Jenny (Rafael), Amanda and Brent, and four great- grandchildren, Mia, Rachel, Grace and Luke. Also surviving are two sisters, Pat and Sue (Eddie) and one brother, Mike (Joann) and many nieces and nephews. A Military Honors Service is to be held on Monday, June 3rd at Miramar National Cemetery at 8:30am.

On Sunday, May 26, 2019, Darby (John) Leon Thompson, loving husband, brother, father, uncle, grandfather and great-grandfather passed away peacefully surrounded by his loved ones at the age of 79. Darby was born on November 21, 1939 to Henry... View Obituary & Service Information

The family of Darby “John” Leon Thompson created this Life Tributes page to make it easy to share your memories.