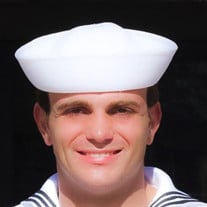 David Arthur Schmaus was born at home in Broomfield, Colorado, on November 20, 1995. He had the most beautiful smile. He had a very close sibling bond with his sister, Carrie. David grew up with his beloved family dogs, Zeke, Junie, and Bonnie. He always had a wonderful love for animals. During his early years of school, David was a sponge. He was incredibly bright and learning came naturally. As he progressed through middle school, he was under-motivated, sometimes not turning in his homework despite having it filled out and stuffed in his backpack. At one point, he was tested to see if he was still on grade level. Test results showed that he was two grades above. Needing a change and seeking new horizons, he attended St. John's Military school in Salina, Kansas, in August 2010. David excelled in many areas at St. John's, including making the Dean's list several times, co-founding a weight lifting club, and was a member of the Battalion Staff as an S3 (S3 being responsible for training every aspect of a battalion's operations. David loved traveling, and got to do so not only through the military, but with family as well. Being the son of an airline employee has its perks. Ireland, Scotland, England, Australia, Los Angeles, North and South Carolina, Kansas City and ultimately Turlock. In October 2017, David enlisted in the United States Navy (Norfolk, Virginia) and was honored to be selected as an Aviation Machinist's Mate Third Class Petty Officer for the VCR-30 Squadron. When not working, David enjoyed getting "swole" at the gym, reading books, writing emails to his family, grilling amazing meals, shooting guns at the gun range, and spending time with his wife, family and friends. Most recently, in early 2021, while stationed in San Diego, David met the love of his life, Sarah. They were married on June 9, 2021. He said, "When you know, you know." David was a kind, loving, hilarious, positive and genuine person to not only Sarah, but to every person that he came in contact with. David was fiercely loved; and he will be terribly missed by his family and friends.

David Arthur Schmaus was born at home in Broomfield, Colorado, on November 20, 1995. He had the most beautiful smile. He had a very close sibling bond with his sister, Carrie. David grew up with his beloved family dogs, Zeke, Junie, and Bonnie.... View Obituary & Service Information

The family of David Arthur Schmaus created this Life Tributes page to make it easy to share your memories.

David Arthur Schmaus was born at home in Broomfield, Colorado,...

Send flowers to the Schmaus family.