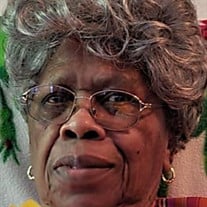 Dorothy Regina Simpson was born March 26th, 1932 in Granite, MD. She was the third of four children born to James and Ella Wilson. Dorothy graduated from Benjamin Banneker High School and shortly thereafter married her childhood sweetheart, Wilson Abraham Simpson, Jr. on May 21st 1953, at St. Alphonsus Catholic Church in Woodstock, Maryland. They were married for 51 years, with Wilson losing his battle to cancer on July 5th, 2004. Wilson was a career Navy man who deployed to several duty stations, including Massachusetts, Rhode Island, Hawaii and California, eventually settling in San Diego. Dorothy was a loving wife and stay-at-home mother, who raised five children. She was proud of the fact that she was able to save $500 from babysitting, that was used as a down payment for the house the family grew up in. Dorothy loved 50's & 60's music and liked to show her children that she was a great dancer. Dorothy had just celebrated her 90th birthday, with many family and friends in attendance. Dorothy departed this world peacefully at home on April 21, 2022 in the early evening, with her remaining children in attendance. She leaves to cherish her memory - her children Mildred Scarber, Darlene Simpson, Sharon Simpson, Cheryl Thompson (who predeceased her in death) and Ralph Simpson; her grandsons Andrae Scott, Jeffrey Adams, Sean Scarber and Dante Thompson and her 6 great grandchildren. Dorothy also leaves behind a sister-in-law as well as many nieces and nephews on the east coast. Link to Live Streaming - http://webcast.funeralvue.com/events/viewer/72935

The family of Dorothy R Simpson created this Life Tributes page to make it easy to share your memories.

Send flowers to the Simpson family.