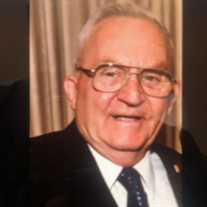 Edward G. Shambo, 89, passed away April 20, 2021 (9:00pm) at Scripps Mercy Hospital. He battled a serious illness which kept him in multiple facilities for 100 days before God took him home as he was surrounded by his wife and children. He was the oldest of four sons born July 6, 1931 in Northfields, Vermont to parents Rockwood J. Shambo and Evelyn A. Shambo. After graduating from high school, he joined the U. S. Army while serving up to 25 years of service with an Honorable Discharge as an SFC which he accomplished many awards below. AOM (C), NDSM w 10LC MUC PUC RVNCM w 60 DEVICE VSM w 2SIL & 1BZ SVC STAR 8 OS BARS GCMDL (4th AWD) ARCOM BSM w 2 OLC He served in the Vietnam War starting in Feb 1966 and after that he met his wife (Nga N. Shambo). After his service he worked for the American of Legion. Was Chief Canine for the US Embassy in Saigon Vietnam. In April 1975 he and his family returned to the United States. Upon arrival to the United States, he headed to the East Coast as he introduced his wife and children to his family in New Hampshire where he was a loyal member of the VFW-Post 02571. He stayed for a year and worked for the Holiday Inn Hotel. But in 1976 they moved to San Diego and have resided for over 45 years. He had a job lined up with the VA Hospital, but would you know it made a left turn instead of a right turn and was introduced to Scripps Memorial Hospital in La Jolla, CA. That decision resulted in over 40 years of service from 1976 to 2017. While at Scripps he demonstrated certain energy and was well respected as a hard-working man. They had a saying at Scripps La Jolla... "Call ED Shambo. He has been a fixture of Scripps La Jolla and was considered the hospital's un-official Good Will Ambassador. He started his career in food service and after a nearly fatal accident at home, he returned and shifted over to Security where he worked for 15 more years, followed by engineering serving as a Special Projects Coordinator. Over the years he built relationships with thousands of people in the hospital and the community. He was known as the face of Scripps La Jolla to donors like Paul Whittier and Sally Tippett and was on a first name basis with staff and physicians throughout the campus, while receiving hundreds of letters of accommodations. During his career, he received many awards for being an outstanding employee including: Employee Recognition Award 1982, Beyond the Call of Duty 1987, Value In Action Award in 1999, 2003, 2004 and 2006 as well as 40 years of service in 2016. He loved to joke and make everyone laugh. He and his wife were committed to providing a better life while building a strong family foundation (love, warmth and discipline) for their children. Their home became a gathering for all family and friends. He loved celebrating the holidays, birthdays and welcomed most all traditions. He enjoyed sight-seeing, walking, listening to soft music and dance. He believed in a neat appearance demonstrating his military background. Another unspoken example of his kindness which touched many lives included the unselfishness and love for his wife's family, relatives and friends. As you can see, he loved his military family, his Scripps family and treasured his own family which brought him the most joy of all. He leaves behind his beloved wife Nga N. Shambo (54 years)., Daughter, Mary Lee Beckett (husband) Mark Beckett, 4 children and one grandson all residing in Oceanside, CA, Son, Edward G. Shambo Jr. (San DIego, CA), Daughter, Ann Marie Shambo, (granddaughter), Jasmine A. Shambo residing in Temecula, CA, Daughter, Melissa A. Shambo-Felix and family (four Children) residing in San Diego, CA, also his brother, William A. Shambo, Sue Shambo (niece), Billy Shambo (nephew) and family in WIlder, Vermont, ROckwood J. Shambo (brother-deceased) and family in Kentucky. Ronald J. Shambo (brother) and family in Brushton, NY and many nieces and nephews.

Edward G. Shambo, 89, passed away April 20, 2021 (9:00pm) at Scripps Mercy Hospital. He battled a serious illness which kept him in multiple facilities for 100 days before God took him home as he was surrounded by his wife and children. He... View Obituary & Service Information

The family of Edward George Shambo created this Life Tributes page to make it easy to share your memories.

Send flowers to the Shambo family.