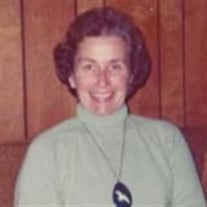 Elizabeth Ree Gavett, Lampard, Breeden (Betty) – Born January 21, 1929 in Harrisburg, PA – Died December 29, 2021 in San Diego, CA. She had a rich and full life that took many different paths. In the early 50’s, she received a BA in English from Mary Washington College and an MFA in Dance from UNC – Greensboro, teaching Modern Dance and PE classes at Mt. Holyoke College in Massachusetts. She met and married her 1st husband, Air Force Lt. Clarke Lampard, in 1952. They travelled the world with the Air Force, having 3 children – each born in a different part of the world (Lee Stone - Fairbanks, Alaska, Clark Lampard - Mt. Holly, New Jersey, and Kevin Lampard - London, England). Betty found a musical outlet in every posting – playing organ for multiple churches and/or singing in their choirs. They retired to San Diego, CA in 1966 where she was active in the music program, directed several youth choirs, and established the first handbell choir (still active today) at Pacific Beach Presbyterian Church. Betty and Clarke parted amicably, and she married Joe Breeden in 1975 and moved even more with him (South Carolina, Tennessee, Kansas, and Arizona) until they finally returned to San Diego in 1997 to spend time with Betty’s 3 kids, Joe’s 3 (Scott, Stuart and Shelley Breeden) and many grandchildren. She has been a member of the Community Congregational Church – singing in the choir, subbing for the organists, and working in various office roles for years. All of her children and grandchildren, their spouses, and countless friends will miss her humor, her kindness, and her loving wisdom… but are grateful for her long well-lived life. We celebrate her life at Community Congregational Church 2088 Beryl St. Pacific Beach CA 92109 at 11:30am on January 23rd, 2022 “ In lieu of flowers, please consider a donation to the church or charity of your choice.” .

The family of Elizabeth Ree Breeden created this Life Tributes page to make it easy to share your memories.

Send flowers to the Breeden family.