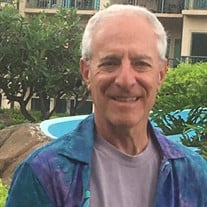 Elliot P. Hurwitz March 1959 - April 2021 An angel has earned his wings and "I believe that angels breathe and love will live on and never leave"..... Elliot had his wings here with us. He was always in service to people. He was a master... View Obituary & Service Information

The family of Elliot P Hurwitz created this Life Tributes page to make it easy to share your memories.

An angel has earned...

Send flowers to the Hurwitz family.