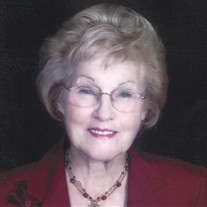 Elsie Burton Haake, 96, passed away peacefully at home on January 18, 2022. She was born April 16,1925, in Lebanon,TN. She grew up on a farm and was one of seven children of the late Grover Cleveland Burton and Lela Gibbs. Elsie attended Nashville Business College and worked in Nashville, TN. After graduating she worked a while with the Tennessee Central Railroad. During World War II, she lived and worked in Oak Ridge, TN, with Union Carbide on the Manhatten Project. During the evening, three times a week, she served as a Red Cross Nurse's Aide. She was also a member of the K-25 Carbide Girls Club. While in Oakridge, TN. Elsie met Eugene Haake and married on January 20, 1951 at the historical Chapel on the Hill. Elsie and Eugene moved to Ft. Worth, TX, where they lived for 10 years and raised their three children. While living in Ft. Worth, Elsie was a member of American Business Women's Association and the La Jolla Chapter of Ohara School of lkebana (Japanese Flower Arrangements). She was also a member of Trinity Lutheran Church and Ridglea Hills Garden Club. Elsie enjoyed flower arranging, gardening, and growing orchids and roses. She was also interested in interior decorating and design. Elsie, Eugene and the children moved to San Diego, CA in 1962. Elsie became a member of Clairemont Lutheran Church, where she served on several committees. She was a member of the Altar Guild and Women's Group for over 48 years. Elsie was very active in her community. She worked as a travel agent for 15+ years and co-owned Bay Park Cruisers and Tours. Her hobbies included sewing, quilting, creating porcelain lace draped dolls, and making jewelry. She designed and copywrited pretzel jewelry with the words Faith, Hope and Charity called Pretzels and Prayers. Elsie also loved cooking and baking, and collected hundreds of cookbooks. She was an excellent gourmet cook. She and her husband, Eugene traveled extensively to various parts of the world and took numerous cruises. At age 80 and 81, for her birthday, she went skydiving. At age 83, she was asked to model clothing for a women's fashion dress store called Draper's & Damon's in La Jolla, CA. She modeled for two years. Elsie had a beautiful smile and a youthful look, and always maintained a generous loving spirit. She will be missed dearly. Elsie is survived by her son Ronald Haake and daughter Janet Haake of San Diego, CA, and daughter Barbara Haake of Plano, TX. Viewing will be on Tuesday, February 8 from 12:00 pm to 4:00 pm at Clairemont Mortuary ( 4266 Mt. Abernathy Ave. San Diego, CA) A graveside service will be held on Wednesday February 9, at 11:00 am at El Camino Memorial Park/Freedom Terrace (5600 Carroll Canyon Rd. San Diego, CA). In lieu of flowers, donations can be made to Helen Woodward Animal Center, San Diego Humane Society, or any other animal or children's charity of choice. Please sign the Guest Book online obituaries.sandiegouniontribune.com

Elsie Burton Haake, 96, passed away peacefully at home on January 18, 2022. She was born April 16,1925, in Lebanon,TN. She grew up on a farm and was one of seven children of the late Grover Cleveland Burton and Lela Gibbs. Elsie attended Nashville... View Obituary & Service Information

The family of Elsie B Haake created this Life Tributes page to make it easy to share your memories.

Elsie Burton Haake, 96, passed away peacefully at home on January...

Send flowers to the Haake family.