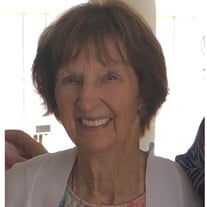 Hazel Babe Chirnside December 9, 1928 - August 31, 2021 Hazel was born in Onawa, Iowa on December 9, 1928 to Earl and Celesta Fouts. She was the youngest of 3 children: older brother Loyce and sister Kathleen. Her childhood memories include having a pony named Diamond, and her first job as a corn husker. She attended Drake University in Iowa and earned a degree in Music. Hazel came to California for the first time after graduating from college to help a friend move. She liked what she saw and made a fun and interesting life in the Los Angeles area as a grade school teacher. She enjoyed traveling and participating in musical performances. She met her future husband, Richard Chirnside, in 1958 at a Christmas party, and they were married the following July. Her marriage to Richard lasted 53 years, until his death in 2012. Richard was a Navy officer and they raised four children "military style", moving every couple of years. Hazel enjoyed the adventure of living in many places, and she always immediately established her family at the local Catholic church where she was very active in her faith. Her greatest joys were spending time with family, serving the church, and socializing. After raising her children, Hazel started a second career as a real estate agent. This was a good fit for her out-going and independent personality. Hazel and Richard retired in Scripps Ranch where they attended Saint Gregory the Great Catholic Church. During her years there, she became involved in several ministries and never wanted to miss a church function. She cherished her many friendships developed at this time. Hazel is survived by her four children: Michael and wife Beth, Theresa and husband Jim, Monica and husband John, and Maria and husband Mark. She dearly loved her 9 grandchildren and 4 great-grandbabies with another due any day. She will be deeply missed by her family, friends and the church, but now is safe in the arms of Jesus. Funeral Mass: St. Gregory the Great Church, Tuesday, September 7, 2021 at 10AM Internment: Miramar National Cemetery, Thursday, September 9, 2021 at 11:15

Hazel Babe Chirnside December 9, 1928 - August 31, 2021 Hazel was born in Onawa, Iowa on December 9, 1928 to Earl and Celesta Fouts. She was the youngest of 3 children: older brother Loyce and sister Kathleen. Her childhood memories include... View Obituary & Service Information

The family of Hazel Babe Chirnside created this Life Tributes page to make it easy to share your memories.

Send flowers to the Chirnside family.