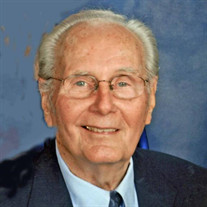 Jay Leland Sprague was born July 5,1928 in San Diego, California to Carl Giles Sprague and Edna Melissa Devore. Jay grew up in San Diego in a happy family with his siblings, Karl, Karen and Dwayne. He was the “surprise” baby, born 13 years after Dwayne. Jay joined the Army right out of High School during the Korean conflict and was stationed in Alaska. He never saw any “action” but always had great stories to tell about his adventures there. He made a best buddy, Wayne, who kept in touch all of these many years. Jay married Ina Ebrite in 1952 and had 2 children, Michael and Deborah. He was employed with San Diego Gas and Electric Company, where he became a Supervisor over the gas division. He would arrive often first on the scene when gas leaks or emergencies arose related to gas lines or potential danger. Due to Jay’s age difference, his brothers became more like father’s than siblings and taught him how to do all the things they were skilled at and enjoyed - carpentry, electrical, plumbing and construction. Jay took to those skills quickly and proficiently, using his talents over the years to help family and friends with all the cabinet building, home building and repairs, carpentry, plumbing, anything and everything they needed or desired. After Jay’s divorce from Ina, he met and married Eva Ward in 1973 and “unofficially” adopted her 4 children, Jim, Steve, David and Leah. He eventually used his hands for the glory of God after his retirement, traveling around the country with Eva, working with Mobile Missionary Assistance Program (MMAPS) for 14 years. He and Eva loved to travel and made trips many times from one end of the country to the other as well as across the world. He loved to video and made hundreds of videos of every trip and Eva logged it all in books and albums. When the family would gather, there would be Jay with a video camera on his shoulder creating a lasting record of the event. Due to Eva’s declining health, Jay and Eva relocated to Oklahoma City several years ago to be near Leah and her family. Eva passed away from Leukemia in 2017. Jay lived with Leah and her husband Len these past 4 years. He passed away at home. Jay was a beloved father, grandfather, great-grandfather, and friend. He was a quiet man, sweet natured, with a great sense of humor. He appreciated a good “dad” joke and likely had at the ready a quick one; laughed off his own foibles and always seemed to have a smile on his face. He was a generous man, always looking to help his family out. He gave generously to his church and worthy organizations that he believed in. He was greatly loved and will be greatly missed! He is survived by cousin, Gwen Gire of San Diego, 6 children, Michael and Kathy Sprague, Deborah (Sprague) and Randy Berlin, James and Alice Ward, Steven and Debi Ward, David and Pamela Ward, Leah (Ward) and Len LaRosa, 10 grandchildren and 11 great-grandchildren. A graveside service will be held Saturday, January 29 at 2:00 p.m. at Greenwood Cemetery in San Diego, California.

Jay Leland Sprague was born July 5,1928 in San Diego, California to Carl Giles Sprague and Edna Melissa Devore. Jay grew up in San Diego in a happy family with his siblings, Karl, Karen and Dwayne. He was the &#8220;surprise&#8221; baby, born... View Obituary & Service Information

The family of Jay Leland Sprague created this Life Tributes page to make it easy to share your memories.