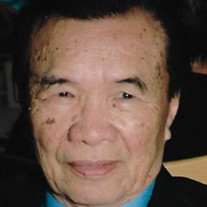 Jovenal Gomez Panao August 11, 1928- January 18, 2022 Jovenal “Ben” Gomez Panao was born August 11, 1928, to Roque Bustillo Panao and Antonina Gomez Panao in Iloilo City, Philippines. He passed away peacefully on January 18, 2022, with his wife by his side. He was the third child and first son of five children. Jovenal was a devoted husband, father, grandfather and great grandfather. He is preceded in death by his three sisters Elena Panao, Felicidad Panao and Hilda (Panao) Gervacio. Jovenal joined the United States Navy in 1954 and proudly served his country for 20 years until his retirement. His Navy career led him to move to the United States with his wife Nelly. A few of his duty stations include Oak Harbor, WA, Long Beach, CA, Chula Vista, CA, Oahu, HI and San Diego, CA. After retiring from the Navy in 1974, Jovenal and Nelly settled in San Diego, CA with their daughter Zenia. In 1976, he continued his civic duty and worked for the U.S. Post Office in San Diego for 17 years until he retired in 1993. Jovenal is survived by his wife of 58 years Nelly D. Panao, daughter Zenia D. Panao, granddaughter Verna (Panao) Cortes, Verna’s husband, Corey and their three children, Kaili (10), Joven (5) and Theodore (2). As well has his youngest bother Jose “Joey” Panao and numerous nieces, nephews and cousins. Jovenal will truly be missed. His legacy will be remembered through his kindness, love, care and generosity to his family and relatives near or far. May God grant you eternal peace.

The family of Jovenal Gomez Panao created this Life Tributes page to make it easy to share your memories.

Send flowers to the Panao family.