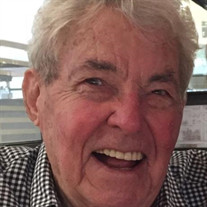 Maynard R. Bissonnette passed away peacefully on Friday, December 10th, ending a robust and passionate life in which he served, delighted, and touched countless people throughout his 97 years. A head of curls, ruddy cheeks, a ready grin and hearty laugh, twinkly eyes, on the lookout for chocolate – some things never changed. Born in St. George, Illinois, on Dec. 15th, 1924, Maynard started from humble beginnings to become a self-made man. Upon graduation from St. Pat’s High School in Kankakee in 1942, he joined up with the Marines where he served in the Pacific theater during the war until 1946. Just out of the service, he was taken under the wing of a priest who enabled him, under the GI Bill to attend St. Ambrose College. It was during that time that he struck it lucky, making Charlotte Suprenant his bride, and welcoming their first born, Andrew, in 1949. Beyond his imagining, he went on to earn a law degree from the University of Notre Dame, graduating second in his class. They returned to Kankakee from South Bend with their second child, Mary LaRee. Maynard soon became one of the most respected attorneys in Kankakee County, due in large part to his expertise of the law, but also his abiding devotion to the people he represented. A dynamic duo, Maynard and Charlotte succeeded in growing his practice, becoming very active members of St. Patrick’s Church and to the larger community, while bringing another four children into the world, Tom, Ed, Denise and Michelle. In 1972, the Bissonnette family headed to San Diego, California, the city with which Maynard had first become enamored as a young Marine, and to which he secretly swore he would return. Maynard and Charlotte divorced in 1975, but they continued to watch their family grow, as they welcomed thirteen grandchildren to the fold. Maynard set up his law practice in University City, where he and his second wife, Diane Bissonnette, and his two stepsons, Roy and Guy, resided for over thirty years. During that time Maynard also became a professor of Law, a role that he wholeheartedly embraced. For Maynard, the law was a calling, and a source of such joy, that he did not retire until he was 90 years old! Maynard was humble and down to earth, abhorring show-offs, know-it-alls, political correctness, and any need to impress. A lifelong democrat and spiritual seeker, he embraced the absolute necessity to listen and respect divergent views. He lived that credo and was deeply disappointed by both sides of our polarized world where people with a closed mindset insisted on rightness. He was a generous man, quick with a helping hand or pro bono law work, with a heart for improving the world one deed at a time. Maynard loved people and people loved him back. His intelligence, curiosity, and open-mindedness came together in an irresistible combination that drew people to him like moths to a flame. Maynard was a Renaissance man – a lover of live theater, art, movies (particularly Westerns), travel, gardening, golf, the horse races, and sports of all kinds. An avid reader, he had an insatiable appetite for history, politics, and religions of the world. He was a pool shark, a card shark, a Scrabble wiz, and a maker of many “damn good drinks”. As a father and grandfather, he was cherished for his quirky sense of humor, his calm and mild manner, his ability to listen deeply, and to parcel out wisdom without pretense. And with all of this, and so much more, he was extremely modest and self-effacing. To know him was to love him. To lose him is to grieve an entire universe that was the one and only Maynard Romeo Bissonnette. Maynard is survived by his sister and BFF Anna (Marion) Bissonnette of Waltham, MA; his children, Andy (Debbie) Bissonnette of Grand Haven, MI; Maria (Michael) Moy of San Leandro, CA ; Tom (Debbie) Bissonnette of Las Vegas; Ed (Joy) Bissonnette of Coronado, CA; Denise (Rob) Bissonnette of Winnipeg, Canada; Michelle (Robert) Donahue of Santa Ana, CA; his stepsons Roy (Zoe) Miller of Santa Rosa, CA; and Guy (Jennifer) Miller of San Diego, CA; seventeen grandchildren, twelve great-grandchildren, and many friends who will miss him fiercely. A memorial service will be held in late February, 2022, at Torrey Pines Chri

Maynard R. Bissonnette passed away peacefully on Friday, December 10th, ending a robust and passionate life in which he served, delighted, and touched countless people throughout his 97 years. A head of curls, ruddy cheeks, a ready grin and... View Obituary & Service Information

The family of Maynard R Bissonnette created this Life Tributes page to make it easy to share your memories.

Send flowers to the Bissonnette family.