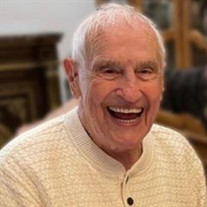 Having lived a “Be-YOU-tiful” life for nearly 95 years, Rocco (Rocky) passed away on May 6, 2022 at Scripps Memorial Hospital after complications from a fractured hip. Born at noon in Newark, New Jersey, with the nearby church bells ringing (a sign of energy and joy that would endure his entire life) to his father, Guiseppe (an immigrant from Italy) and his mother, Teresa, he was raised with two other brothers (Nicholas and Louis) and three sisters (Marie, Netta, and Mella) in a loving, extended Italian family. While of Italian descent, Rocky was most proud of being an American first which compelled him to enlist in the Navy to serve in WWII while still in his senior year at East Side High School in Newark. As an All-City athlete in baseball, basketball, and football, he forfeited several college scholarships to proudly serve his country. He was honorably discharged in August 1946 after President Truman signed the Atomic Energy Act. Rocky immediately enrolled in college attending the College of William and Mary before graduating from the University of Nevada, Reno. He later earned a Master’s Degree in Human Behavior from the United States International University in San Diego. After many, varied jobs along the way, Rocky found his passion in teaching. He returned to East Side High School in Newark to teach industrial arts, physical education, coach football, and created a recreation program for a housing development in Newark at the same time. Rocky left New Jersey for California in 1956 and worked briefly at Convair, a defense contractor in San Diego, before being hired as a physical education and social studies teacher at Sarah Anthony School located in a detention facility for youth (Juvenile Hall). The education program is operated by the San Diego County Office of Education. He was appointed Head Teacher in 1969 and, shortly thereafter, was promoted to the positions of Vice Principal and Principal. He also taught Sociology and Psychology in the evening at San Diego City College for twelve years during his 33-year career at Sarah Anthony School from which he retired in 1990. He was the first Vice Principal to be selected as President of the statewide Juvenile Court Schools Administrators Council in 1976. At a ceremony in 1988, the Probation Department recognized Rocky as an “Honorary Deputy Probation Officer.” Rocky was featured in several newspaper articles during his tenure, and the local news station covered his retirement in 1990—a testament to his dynamic and impressive career! As Principal, Rocky served as a role model to students, not judging them on what crime they committed but getting them to engage in education in the relatively short time they spent in Juvenile Hall. Always wearing a suit and tie, Rocky (aka “Dapper Dan”) visited each classroom every day to interact with the students and insisted that they address their teachers with the title of “Mr., Mrs., Miss, Ms.” before their surname. Accordingly, he was “Mr. Nobile.” That all changed when the movie “Rocky” was released! Students quickly referred to him as Rocky which was fine as it served as a symbol of overcoming obstacles to succeed. He also mentored his employees and encouraged them to continue their education. Many began as teacher assistants and eventually earned their teaching credentials which made him so proud. Rocky’s life was not all about work. He traveled the world visiting every continent except Antarctica, even earning a Reindeer Driver’s license in Finland. He was an avid racquetball player until his knees stopped cooperating. He loved Rhodesian Ridgeback dogs and, hopefully, LaRocco, Gucci and Dino crossed the Rainbow Bridge to greet him! Playing Yahtzee with his wife was a nightly tradition as was solving the Jumble puzzle in the daily newspaper each morning. Rocky was known for his big, bright smile, outstretched arms, energetic personality, sometimes “colorful” language, eggplant parmigiana, and his zest for life! He made an impression on everyone he met, even at the hospital, where a common comment among the many wonderful medical providers was “he is funny,” and “he is so strong.” Rocky fought to the very end…truly the “Original Rocky!” Sorry, Sylvester Stallone… Rocky is survived by his wife of 30 years, Sandra (Thompson), as well as two children from his first marriage: Roxanne McNiel and Fred Nobile, seven grandchildren, five great-grandchildren, and numerous nieces and nephews. Rest in peace, sweet soul. Life will not be same without you! A memorial service will be held at Clairemont Mortuary at 9 am on May 17, with a reception immediately following, and burial at Fort Rosecrans at 1:30 pm.

Having lived a &#8220;Be-YOU-tiful&#8221; life for nearly 95 years, Rocco (Rocky) passed away on May 6, 2022 at Scripps Memorial Hospital after complications from a fractured hip. Born at noon in Newark, New Jersey, with the nearby church bells... View Obituary & Service Information

The family of Rocco Vito Nobile created this Life Tributes page to make it easy to share your memories.

Having lived a “Be-YOU-tiful” life for nearly 95 years, Rocco...