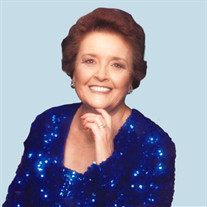 Theresa “Terry” Romero, age 88, passed away peacefully on April 24, 2021 surrounded by loveand family. Terry was born in Tucson, Arizona on October 29, 1932, the eldest of eight brothers and sisters. She spent many of her school years in the San Francisco and Salinas areas, then returned to Tucson where she met Charlie Romero in 1950. They fell in love and Terry waited for Charlie through his military service in the Korean War. They kept their love alive by sending each otherphotos and letters and after his return home, they married on September 10, 1953. They had a son, Charles “Chuck”, then moved to California, first to Los Angeles, then to San Diego. They had four daughters, Elaine, Diane, Rebecca and Sylvia, settling permanently in Clairemont. Charlie and Terry were committed to providing a better life for their children, instilling faith andvalues, and building a strong family foundation. Terry stayed home with the children, in early years shaping the home and their lives with a mixture of steadfast love, warmth, and discipline. Later, the home became a gathering place, where she always welcomed family and friends with a warm hug and a kiss. Being with family was one of her greatest joys. Terry enjoyed gardening, listening to music, dancing to Mexican canciones, holiday traditions and traveling. During their golden years, Charlie and Terry enjoyed taking road trips, site seeing and visiting relatives. She was loving and good-natured with a gentle, elegant grace. A beloved wife of 66 years, a caring mother, an affectionate grandmother of ten and great-grandmother of nine. She had a good memory and loved sharing stories of the “old days” with her grandchildren.A devout Catholic, Terry was a dedicated parishioner at St. Catherine Laboure Church since its opening, serving many years as a choir member, eucharistic minister and catechism instructor. Her faith and daily prayers were ever present throughout her life and with quiet strength carried her as her time neared. She had no fear or doubt that God would be waiting with open arms and that she would be reunited with her husband, son and mother in Heaven, even more glorious than in her dreams.Always in our hearts, she will rest in Eternal Peace Thou Art With Me.

Theresa &#8220;Terry&#8221; Romero, age 88, passed away peacefully on April 24, 2021 surrounded by loveand family. Terry was born in Tucson, Arizona on October 29, 1932, the eldest of eight brothers and sisters. She spent many of her school... View Obituary & Service Information

The family of Theresa Sullivan Romero created this Life Tributes page to make it easy to share your memories.

Send flowers to the Romero family.