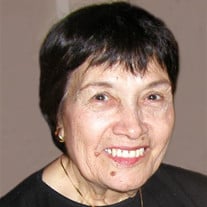 VICTORIA VALADEZ GONZALES OBITUARY Victoria Valadez Gonzales is being remembered as a quiet, gentle, and kind woman as she passed on the morning of Monday, January 11, 2021. She had an infectious laugh that would light up a room, much like one of her favorite pastimes, blowing out candles on a birthday cake to celebrate her family. And no celebration would be complete without cake and ice cream, a favorite past time of a sweet woman with an amazingly sweet-tooth. Victoria is the daughter of Jesus Romo-Valadez from San Juan de Los Lagos, Jalisco, Mexico and Paz Martinez-Valadez from San Gaspar de Los Reyes, Jalisco, Mexico. Her parents left Mexico as refugees during the Mexican Revolution of 1910, first traveling to California to the city of Blythe as itinerant workers. Her parents married in 1917 and moved to the city of Pasadena in 1920 where they settled, started a family, and eventually had nine children comprising of six girls and three boys. Born on July 24th, 1923 in Pasadena, CA, Victoria spent her youth surrounded by music and dancing often with the Pasadena Settlement community center that was founded in 1914. From her teen years, she was in a vibrant local band with her sisters Florence and Teresa known as The Valadez Sisters. Playing folk music from Mexico and dancing with the Jarabe Club, the sisters could often be found performing the Mexican folk dance El Jarabe Tapatio known for colorful dresses and classic Mexican ballads like La Cucaracha and Los Viejitos. The sisters were not the only act and Victoria also performed with her brother, Carmel, when boys were allowed to join in the club and performed in the Glorindrinas with Maria, her sister. Her mother, Paz, also directed the Christmas play, "Los Pastarex" of the Nativity in 1940 which cast Jesus, Carm, Florence, Maria, and Victoria as performers. Many of the Jarabe Club acts were documented in the local Pasadena Settlement community newsletter, the "Shuinala." Performing was her passion and their band played many local festivals in Pasadena and LA county, playing the Hollywood Bowl and traveling as far as Washington D.C. featured in the Eighth Annual National Folk Festival in May, 1941. There is word that they could have recorded an album but this is not available to the family. If anyone reading this has access, we are very interested to hear it. Victoria later was an instructor in the Jarabe Club as it grew and began to encompass a litany of local schools. As times changed through WWII, Victoria worked in the LA area as a rivet inspector for the aerospace giants of the time, Boeing and Douglas Aircraft. Many acclaims have been made of the "Rosie the Riveters" during World War II and Victoria was said to have gained a position of supervisor where quality was assured in the war effort. After the war, she was back to the settlement activities in September of 1945. Her grandson would follow in her footsteps and would become an aerospace engineer. Meeting Pete E. Gonzales led to marriage in on Sept 12, 1953 but not without turmoil. Pete, being Baptist which is a part of Protestant Christianity, and Victoria being Catholic, there was some initial strife. However, Pete agreed that he would convert to Catholicism and they would raise their families under its teachings. A strongly Catholic woman, Victoria and her family attended Saint Catherine Labouré and she often spent time praying the rosary. She often walked to church which was a fond memory of her granddaughter, Mia. Traveling to Frankfurt, Germany and the East Coast and South of the US, Victoria and Pete started their family moving to San Diego permanently in 1968, buying a home in the Kearny Mesa neighborhood. Victoria and Pete would raise their children and spend time with her grandchildren. Victoria loved reading the paper and was well versed in politics and current events. Victoria is preceded in death by her daughter Yolanda who passed in 1967 and her husband Pete Gonzales who passed in 1998, where after she lived with her youngest daughter and caretaker, Yvette. She is survived by her oldest children, Yvonne Ford and Peter. Her grandchildren include Victoria, Mia, and Gabriel. The celebration of life will be at Saint Catherine Labouré on February 1 st at 10:00 am and is open for outdoor service under California guidance where only her immediate family will be allowed to attend the burial services later in the day in Riverside, CA. Victoria will be missed and her smile will never be forgotten.

VICTORIA VALADEZ GONZALES OBITUARY Victoria Valadez Gonzales is being remembered as a quiet, gentle, and kind woman as she passed on the morning of Monday, January 11, 2021. She had an infectious laugh that would light up a room, much like... View Obituary & Service Information

The family of Victoria Valadez Gonzales created this Life Tributes page to make it easy to share your memories.

Send flowers to the Gonzales family.