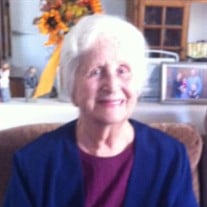 Virginia Sue Grissom died peacefully in her sleep at 7:32 am on March 5, 2022. She was born in Del Rey, CA and raised in Fowler to Zenda and James Rosseau on a ranch with vineyards and crops and poultry houses on January 31, 1923. She was one of six children, Gilbert, Willie, Virginia, Margie, Lee and Leslie. She had four children in four and a half years, Lee, Linda, Gary, Kathy. Her brother, Gilbert brought a shipmate home from the USS Lexington for a weekend and Levi Aaron Grissom and Virginia met and fell in love and married shortly thereafter. Virginia became a Navy wife and followed Levi to duty stations including Corpus Christi Texas, Pensacola Florida, and San Diego where they built a home in Point Loma and rented it out a lot, Olathe Kansas, Oahu Hawaii, Beeville Texas and after retirement to Los Angeles and Georgia, always returning home to Point Loma which was "home." She raised four children alone during the war years when Levi was a pilot flying over combat zones and on special assignments to Alaska. Her family, son, Lee (Sharon) grandchildren David, Jonathan, Matthew, Andrew and five great-grandchildren; daughter, Linda Sturak (Jack), grandchildren Jeffrey, Craig and four great-grandchildren; son, Gary (Terry) grandchildren David, Tina, Amyu; daughter, Kathy (David), grandchildren. Virginia was a busy and engaged homemaker who thoroughly enjoyed raising her family. She had an abiding faith in God and his Son and spent many happy hours in the Ocean Baptist Church and later the Mira Mesa Baptist Church. She sang in the Ladies Chorus for years and had a lovely voice. She was active in the Women's Society and taught Vacation Bible School. She helped out whenever she was needed with grace and kindness. In later years she became a Merle Norman Beauty Consultant and loved it and was loved by her customers. Her arms and heart and home were always opened to family and friends and her children's friends. Whenever her family needed her she was there to help! A Memorial service will be March 22, 2022 at 10:00 am, Clairemont Mortuary, 4266 Mt. Abernathy Ave, San Diego, CA 92117, followed by interment at El Camino Memorial Park at 1pm. Please sign the Guest Book online obituaries.sandiegouniontribune.com

Virginia Sue Grissom died peacefully in her sleep at 7:32 am on March 5, 2022. She was born in Del Rey, CA and raised in Fowler to Zenda and James Rosseau on a ranch with vineyards and crops and poultry houses on January 31, 1923. She was one... View Obituary & Service Information

The family of Virginia Sue Grissom created this Life Tributes page to make it easy to share your memories.

Virginia Sue Grissom died peacefully in her sleep at 7:32 am...

Send flowers to the Grissom family.