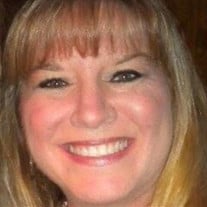 Beloved Daughter, Sister, Wife, Mother, Grandmother Pamela Kay (Davis) Studebaker, 57, of San Diego, CA died on May 23, 2020. She passed away peacefully in her home, surrounded by her loving family, after an admirable and valiant battle against Metastatic Breast Cancer. Born December 21, 1962 in San Francisco, CA, Pam was the third of four daughters born to John R. and Dreama M. Davis. Pam’s identical twin sister Patricia Fay (Patty) was born four minutes after Pam. Being part of a Navy family of six, Pam lived in many locations throughout the U.S. and abroad, including CA, VA, WV, SC, Scotland and Guam. After Pam’s father, J.R., retired from the Navy, the family moved to So. CA where they lived in Huntington Beach and then Yorba Linda, CA. Pam graduated from Esperanza High School in Anaheim, CA in 1981. Pam enjoyed the Navy lifestyle, so after high school, she followed in her father’s footsteps and joined the U.S. Navy. She enjoyed the travel, adventure and seeing more of the world. In 1983 she attended boot camp in Orlando, FL and was stationed on the USS L.Y. Spear in Norfolk, VA. It was on the USS L.Y. Spear where Pam met the love of her life, Jim Studebaker. They married in Yorba Linda in 1985 and began their life and family together while still enlisted. Jim & Pam were meant for each other, especially their combined sense of humor. Everyone around them enjoyed their fun and laughter. Pam was enlisted in the Navy from 1983 through 1988. While enlisted, Pam received the First Good Conduct Award, Navy Achievement Medal and Battle “E” Ribbon. When honorably discharged, she was a TM2, Torpedoman’s Mate Second Class, NAS North Island. After leaving the Navy, Pam worked as an independent bookkeeper so she could balance her professional career with being a mother and wife. They loved raising their two daughters while living in Rancho Bernardo and Poway, San Diego. Many of their neighbors became extended family. As their daughters, Kara & Lauren, grew older, Pam went to work for the Department of Defense. Her positions included Community Support Executive Assistant, Naval Base Coronado and most recently, Internal Review Officer, Fleet & Family Readiness, San Diego. Pam really enjoyed and excelled in these positions. She loved working and volunteering for many military events, including the Blue Angels Air Shows and Fleet Week. Pam was an extremely proud American, veteran and a true patriot. Everyone who knew Pam knew how much she loved to have fun and laugh. Pam loved to entertain and cook and BBQ for family and friends. Pam’s biggest joy was spending time with her daughters, her family and spoiling her grandchildren. Pam loved visiting her daughters in Monterey, Oahu, Maryland and D.C. Pam had a special affinity for visiting the North Shore of Hawaii, Yorba Linda and Laguna Beach, where she has many loving family and friends. Pam was strong and full of energy. She didn’t like to sit around. She liked to Go, Go, Go… Pam loved football and loved to talk football. It was a joy to watch her watch! She loved her San Diego Chargers until they left her. She then became a Rams fan. She was elated that the Chiefs won the Super Bowl this year! Pam had a special fondness for animals, especially dogs. The Studebaker family had three infamous Bassett Hounds: Clyde, Bonnie and Sheriff. No need to say more. Pam was abruptly and sadly preceded in death by her loving husband, James L. Studebaker, originally of Alma, MI, who died on May 23, 2011, exactly nine years previous It brings peace to know she is with him now. Pam was preceded in death by her loving mother, Dreama M. Davis, of Yorba Linda, CA, and sister Sharon (Davis) Heibel of West Jordan, UT. Pam is survived by her father, John R. Davis III, of Laguna Woods, CA; her sisters: Katherine A. (Jon D.) DeLangis of Laguna Beach, CA and Patricia F. Straub of San Diego, CA; daughters: Kara L. (Tom J.) Vause of San Diego, CA and Lauren N. Studebaker of San Diego, CA; granddaughters: Kaylee N. Vause, Charlotte J. Vause, and Baby Emma J. Vause due in June 2020. Pam is survived by her uncle and aunt, James L. Davis and Joyce A. (Davis) Caudle, both of St. Albans, WV. Pam is survived by her two first cousins, Russell A. Harrison of Cross Lanes, WV and Sandra K. Harrison of Malibu, CA. Pam is also survived by three nieces, one nephew, five great nieces and nephews, with one on the way. Pam will be buried with Jim in Miramar Cemetery, 5795 Nobel Drive, San Diego, CA. Due to current restrictions, there will be no ceremony nor public allowed. Details regarding a Celebration of Pam’s life will be announced once restrictions have been lifted. Pam will always be remembered and forever loved and missed. She continues to inspire all of us who knew her.

Beloved Daughter, Sister, Wife, Mother, Grandmother Pamela Kay (Davis) Studebaker, 57, of San Diego, CA died on May 23, 2020. She passed away peacefully in her home, surrounded by her loving family, after an admirable and valiant battle against... View Obituary & Service Information

The family of Pamela Kay Studebaker created this Life Tributes page to make it easy to share your memories.

Send flowers to the Studebaker family.